Here's an easily overlooked Jim Aparo page. This scan is from DC Special Series #8 (the Brave & Bold Special), and we see Jim Aparo handling the penciling, inking and full lettering for this house ad. I believe this was the only time Jim drew the New Gods Orion, Metron, Forager, and Jezebel, although he did draw a Darkseid cameo on the cover of Adventure Comics #459. (The undisclosed Number 3 on this ad was, of course, DC Comics Presents, Superman's counterpart to Batman's Brave & Bold. 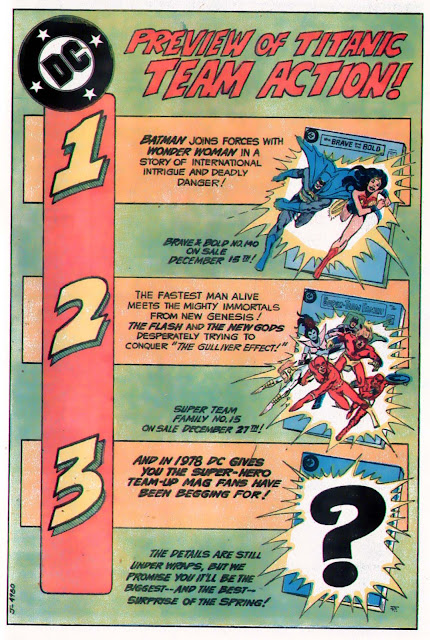 Jim Aparo will be a 2019 inductee into the Will Eisner Hall of Fame, as reported on the official Comicon site.
Aparo will be inducted along with Tarpé Mills, Dave Stevens, and Morrie Turner. Four others will be selected according to votes from a list of nominees. The Eisner Awards are the "Oscars" of the American comic book industry, and Jim's recognition here places him among an elite group, recognized for an exceptional and excellent body of work.

"The Coward" by Steve Skeates and Jim Aparo

From Charlton's Gunfighters #52, October, 1967, comes one of Jim's early comics jobs. The Steve Skeates script hints just enough at the supernatural to give the conclusion an eerie vibe, and Jim demonstrates the strong artistic skill that saw him quickly graduating out of Charlton's minor league publications up to DC. Fortunately for us, Charlton allowed Jim to do his own lettering, sparing us the work of "A. Machine" on this 9-pager. 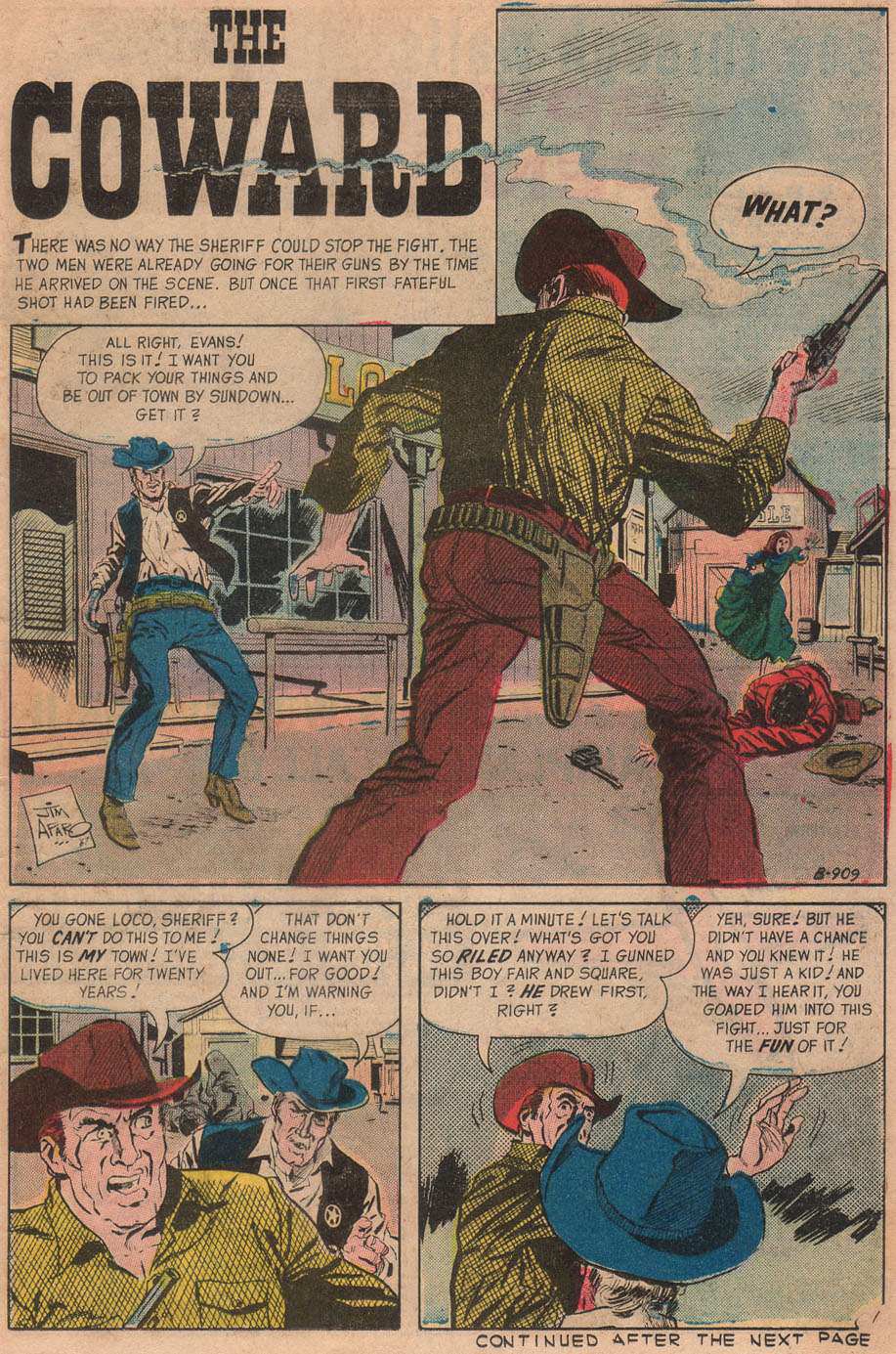 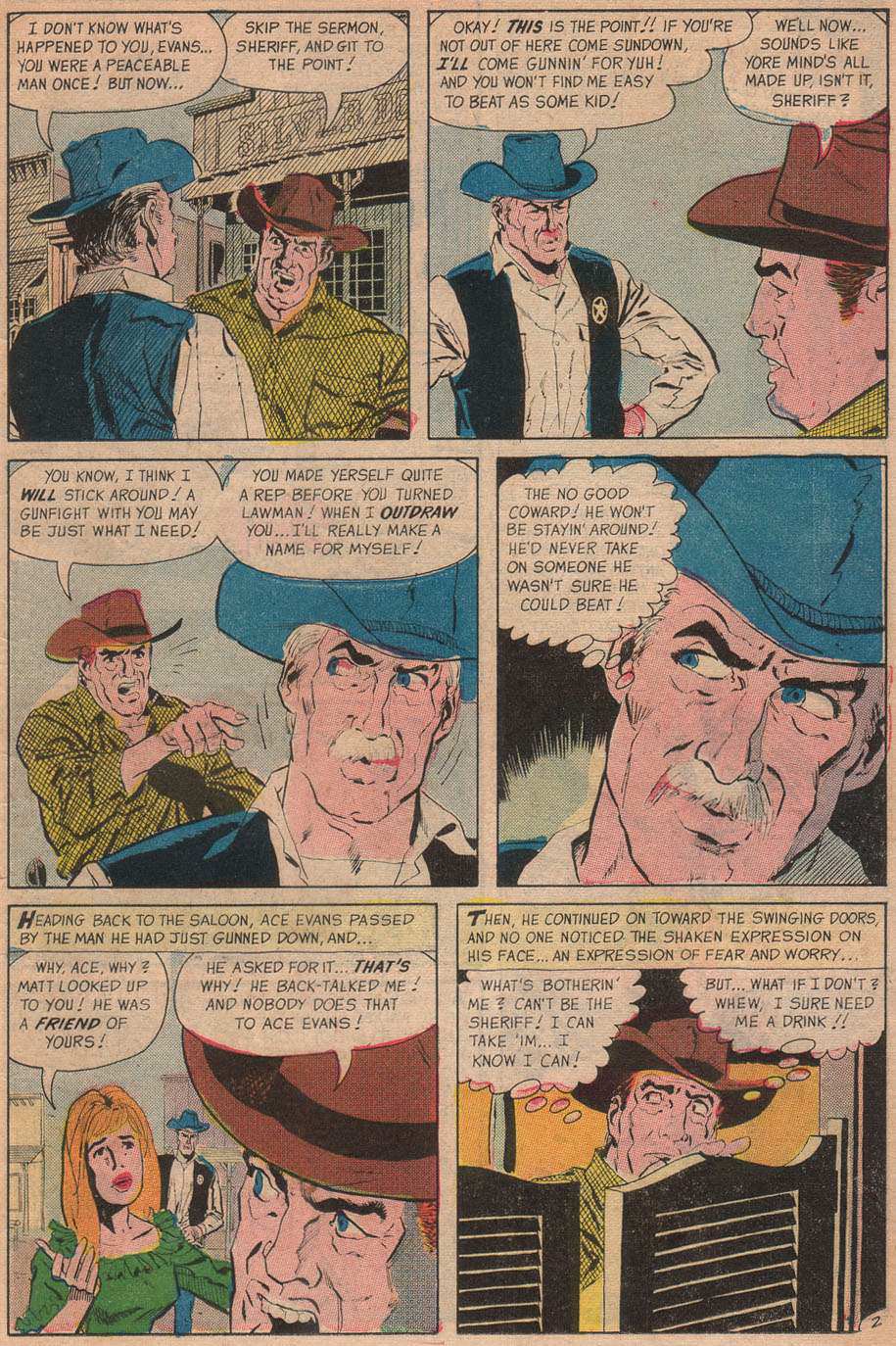 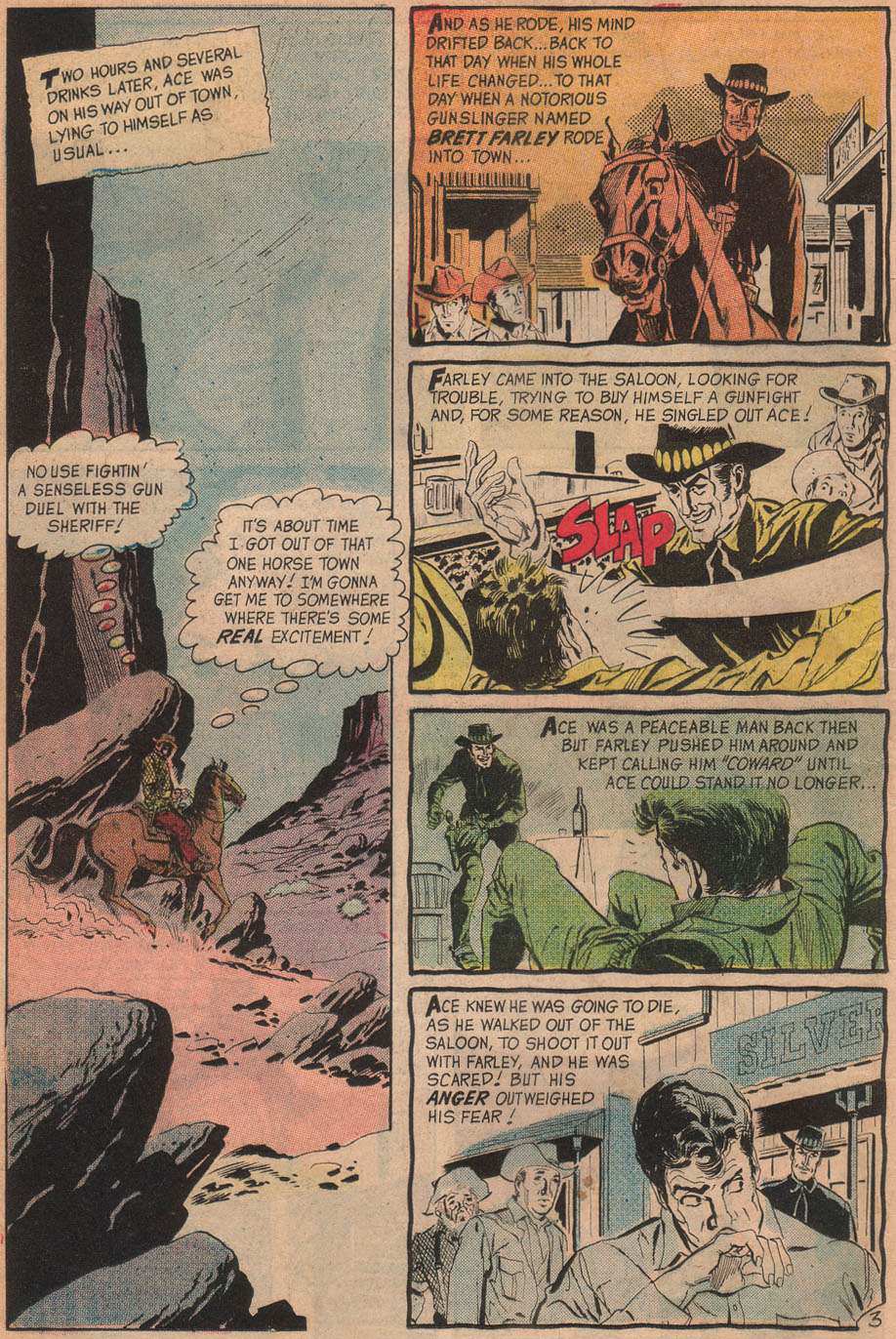 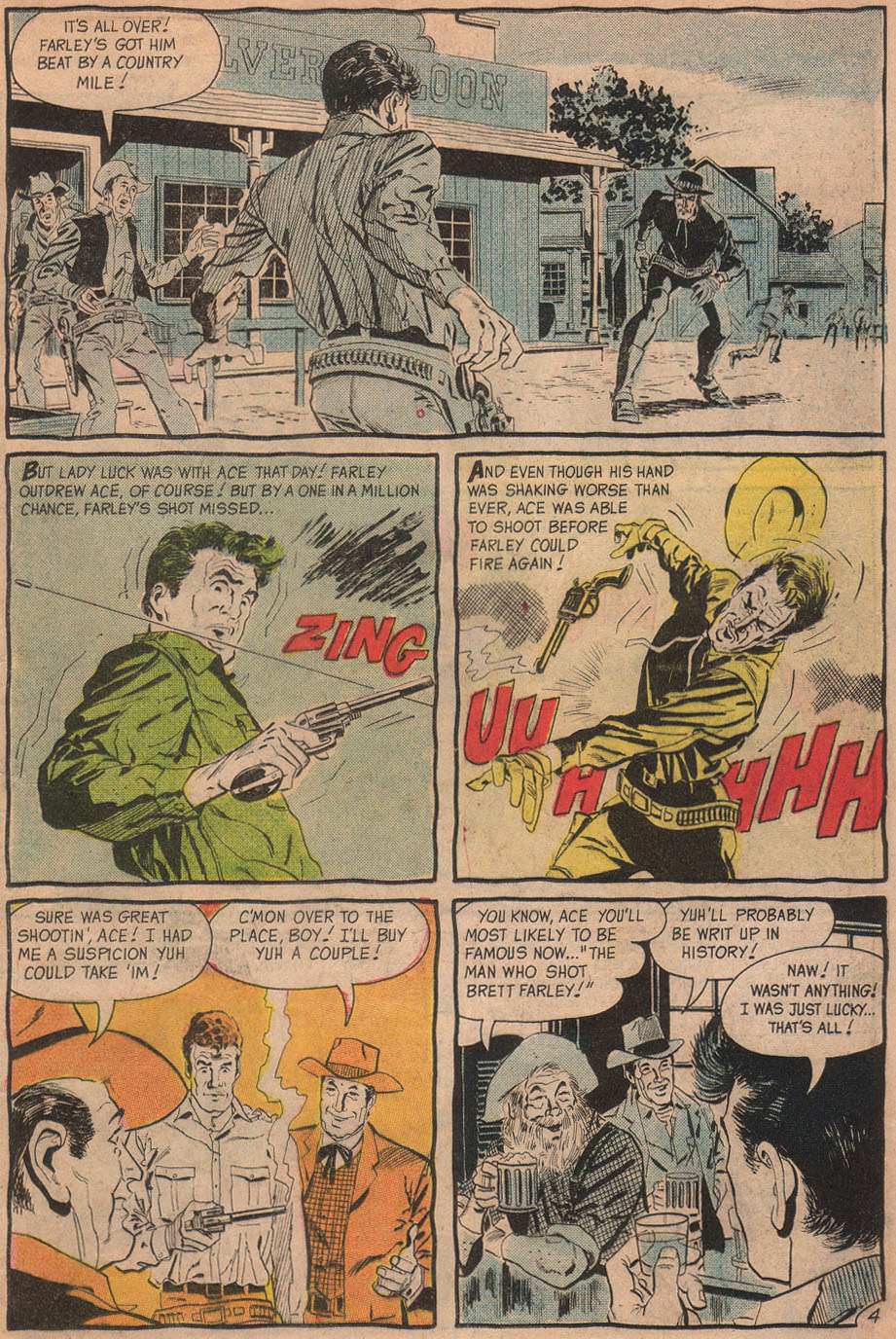 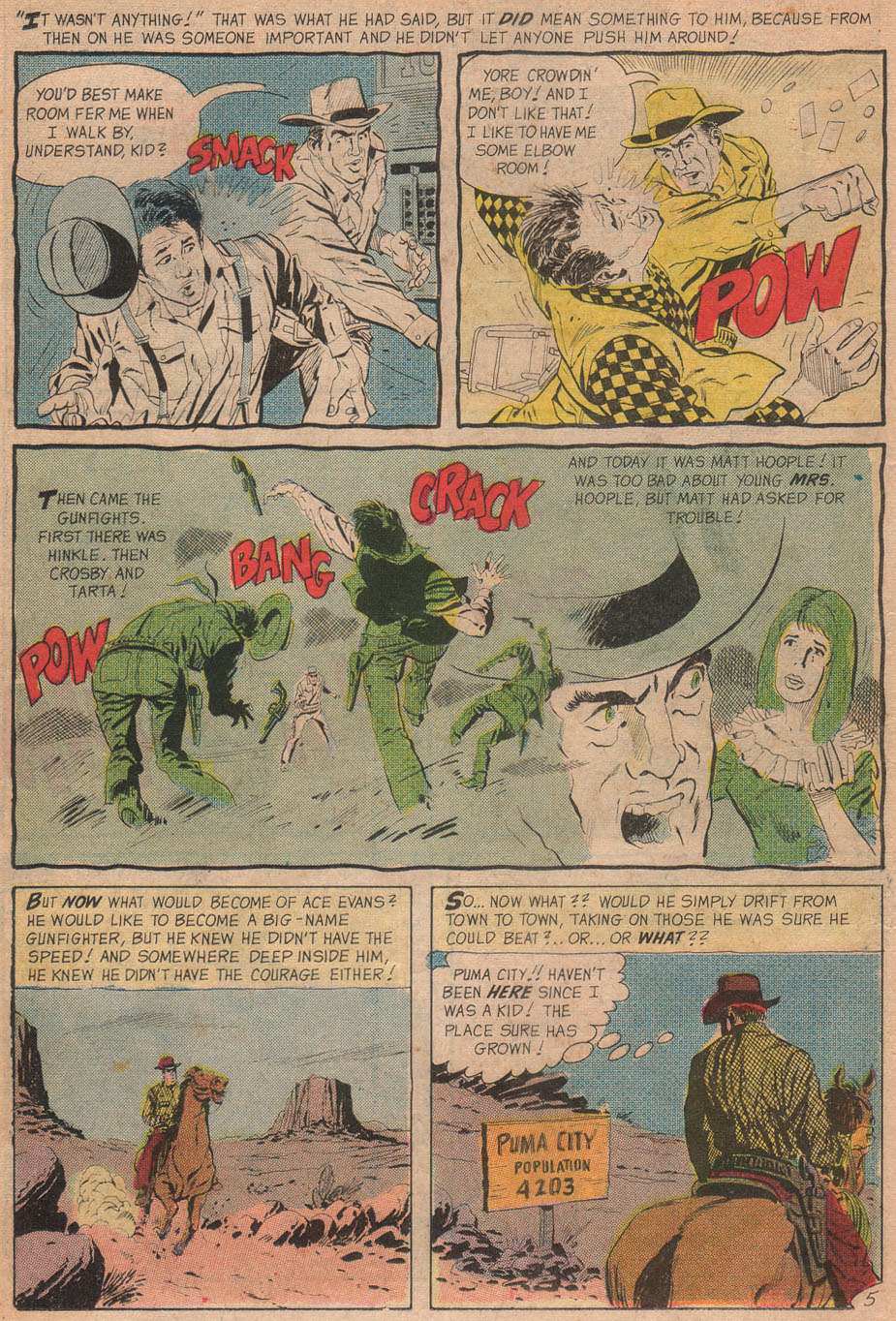 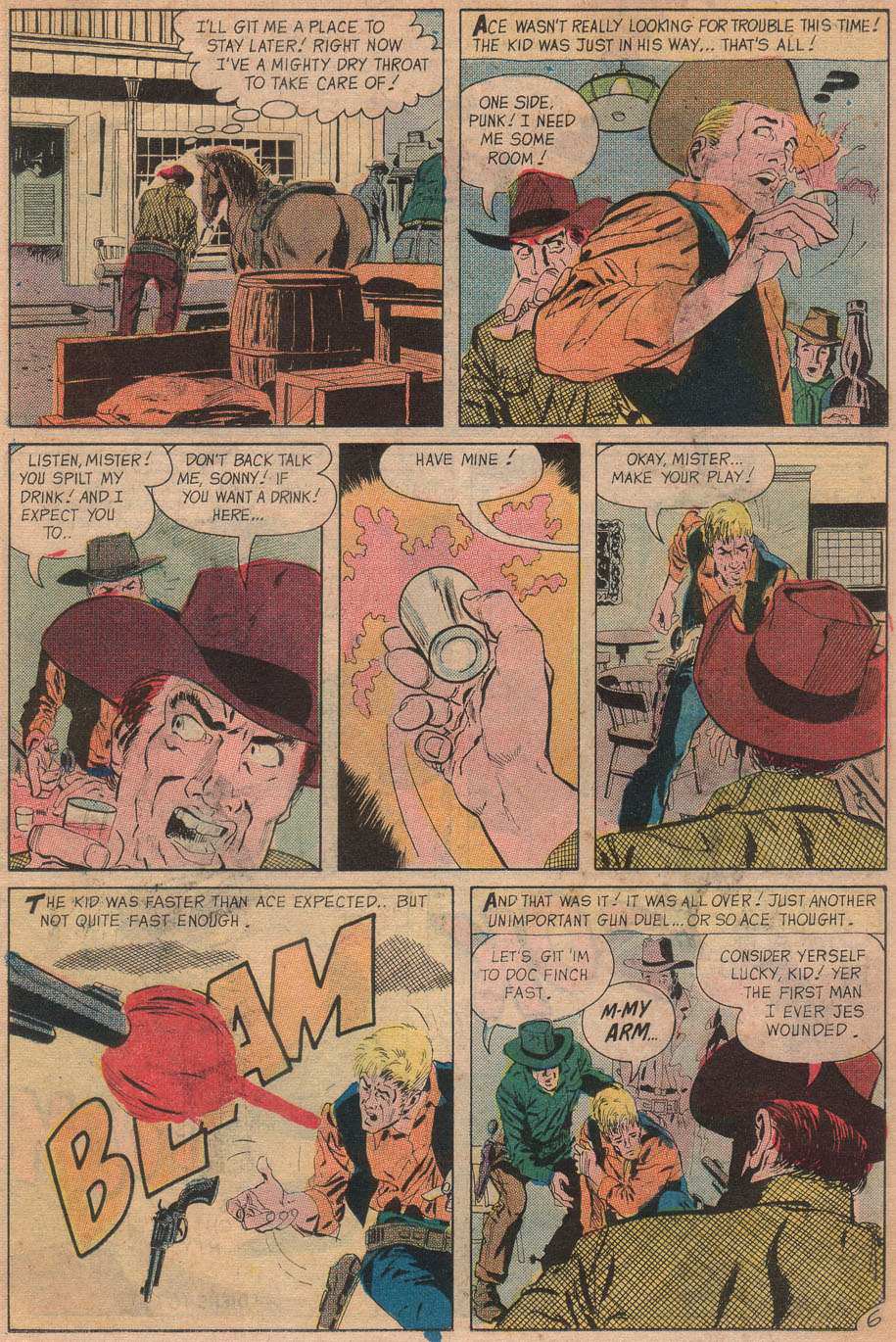 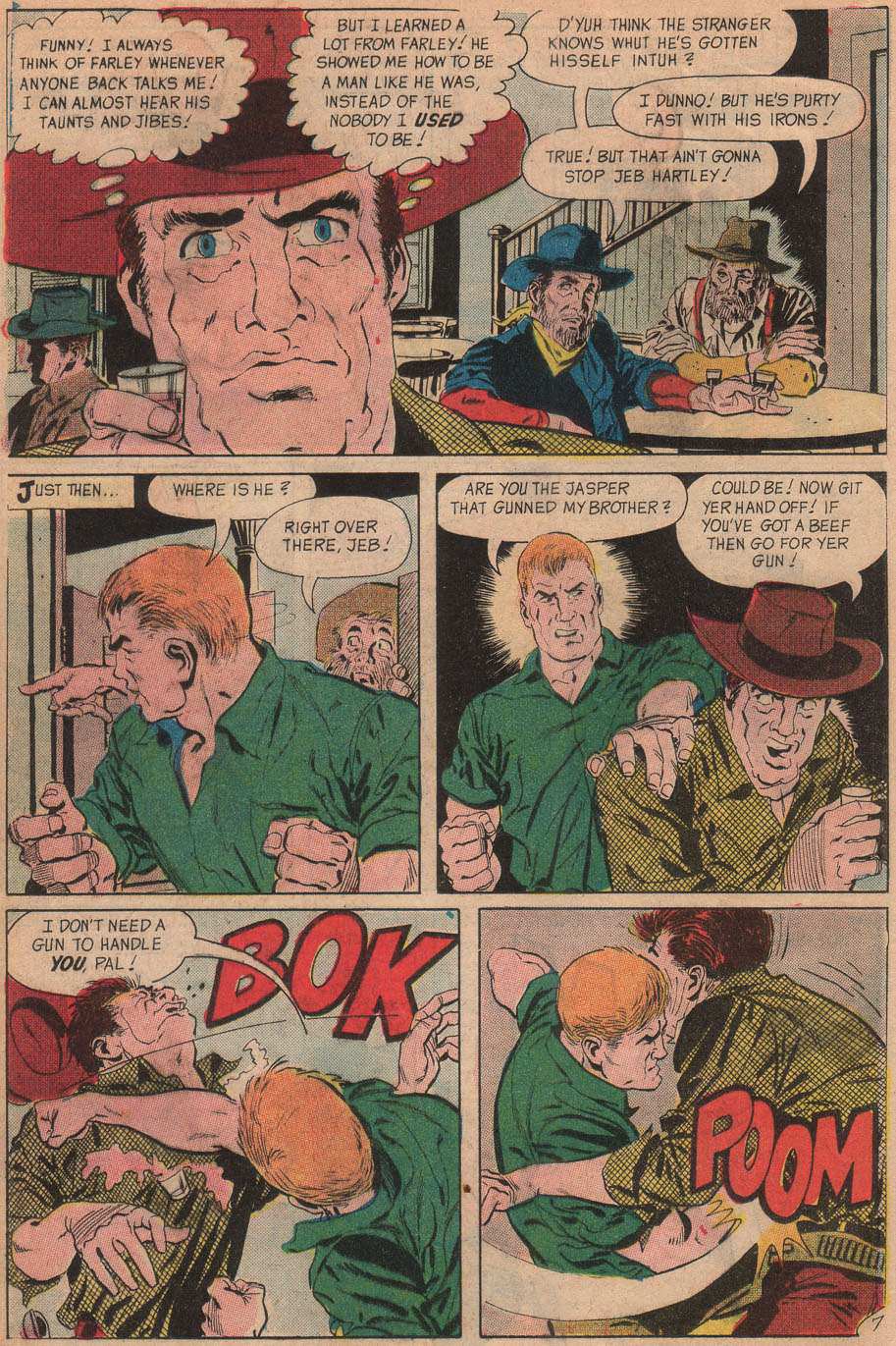 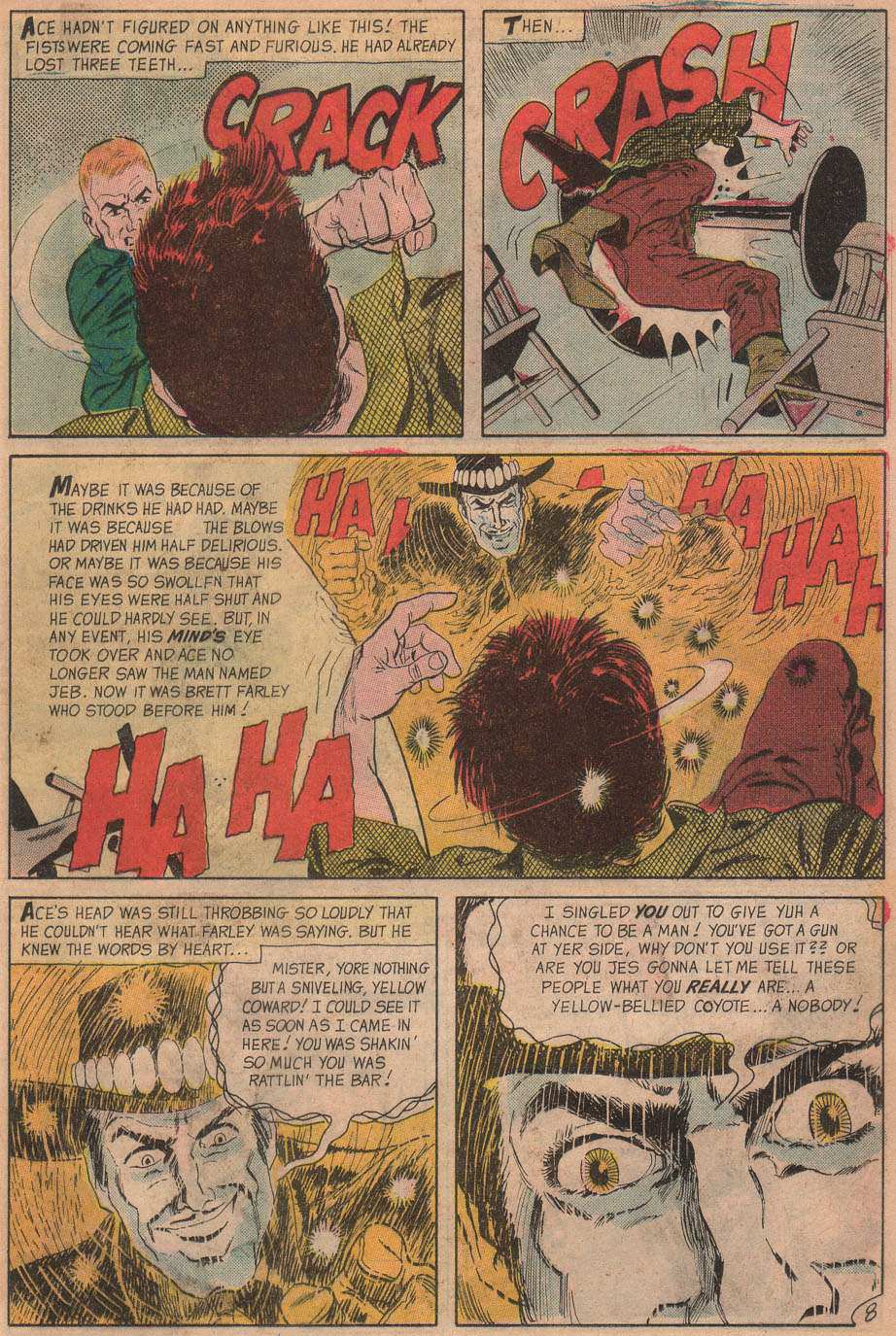 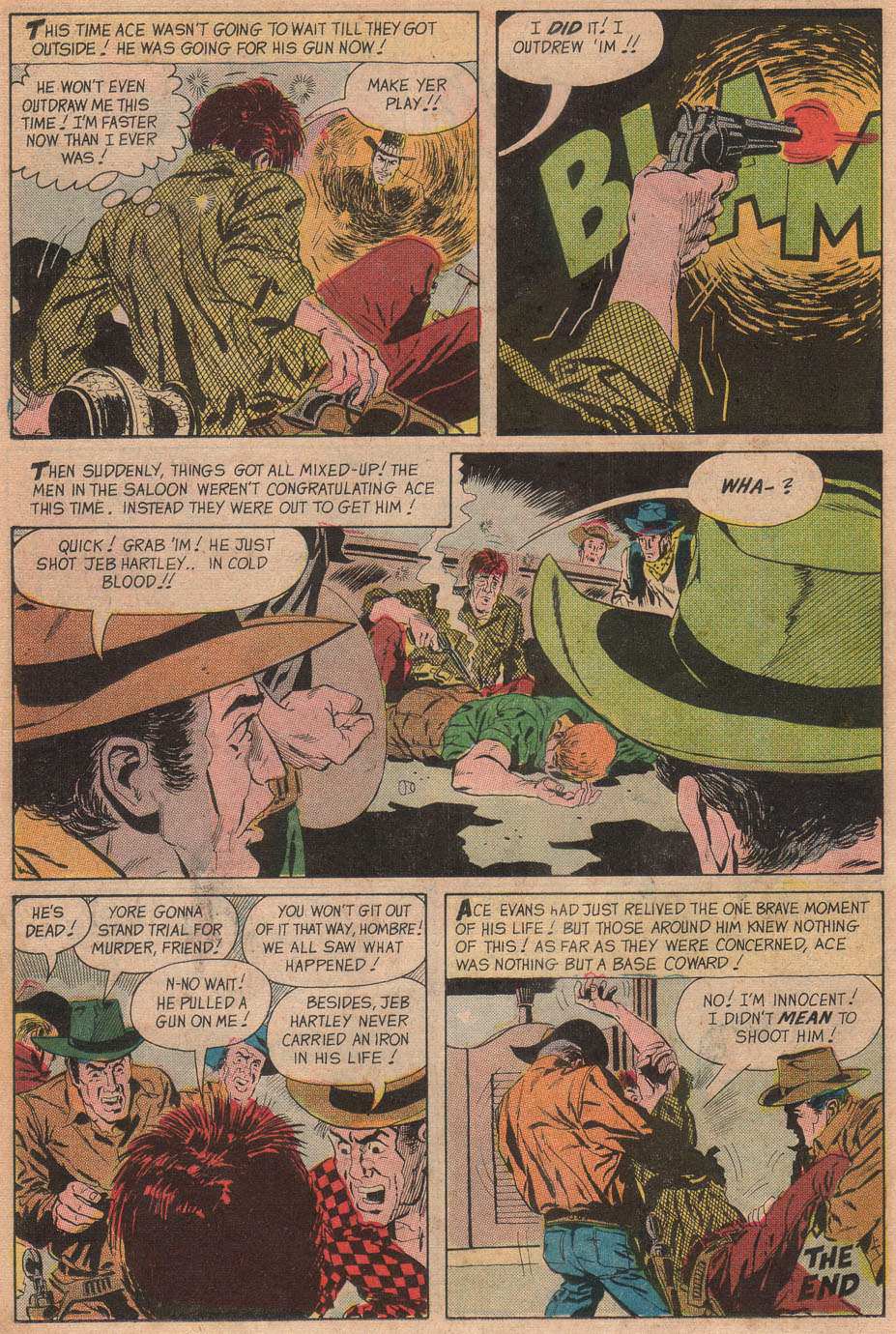 Here's the lead story from World's Finest Comics #268, May, 1981.
The art is credited to Romeo Tanghal, pencils, and Bob Smith, inks.
Tanghal is probably best known as an inker, particularly over George Perez on New Teen Titans, but is a talented artist who has done some penciling in comics for DC in the late 70's and early 80's.
But...
Only one of those pencil jobs looks as suspiciously like the work of Jim Aparo as this one does. I could buy Tanghal swiping a few poses or faces, but I find it very unlikely that he would adopt as much of Jim's page layout style for a single story as I find herein.
Not every page looks like Jim's layouts, though. The page 1 splash doesn't look anything like Aparo's work: 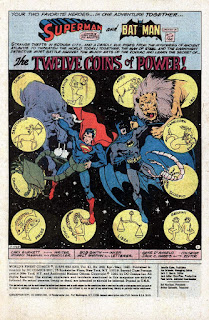 Page 2, though? The poses, the rendition of Batman's cowl, the Dutch angle of panel four, the street light-illuminated overhead shot on panel 6, all scream "Aparo" to the experienced art spotter: 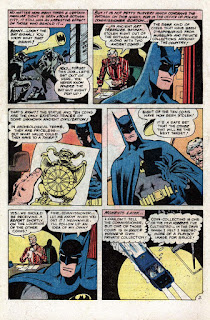 Page 3, and the layouts continue to look like something straight out of a contemporary issue of Brave & Bold: 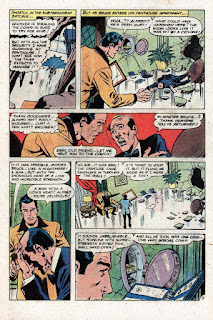 Page 4 is a little less obvious, and the prominence of Jimmy Olsen and Clark Kent, two characters Jim wasn't known for drawing, are a little distracting. But there are clear Aparo touches here as well, from the emotive lines flying off of Morgan Edge's face in panel 1 to the poses of Bruce and Clark on the phone on the bottom tier. 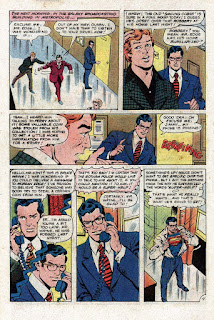 Page 5, with a very Aparoesque Batcave. 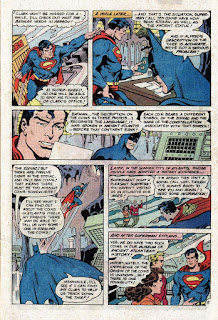 Page 6: the inset of Superman's face in the final panel looks faithful to a tightly drawn Aparo face, and the bearded wizard looks a lot like a villain Jim drew in an Aquaman story: 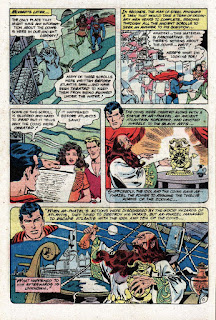 Page 7 looks the least like Aparo since the splash. 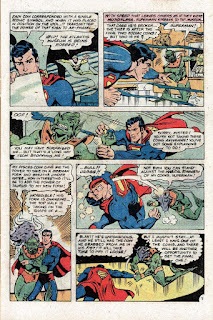 Page 8, and the first two panels are crude but highly reminiscent of Jim's Aquaman work. The final panel shows the Dutch angle that Aparo frequently employed: 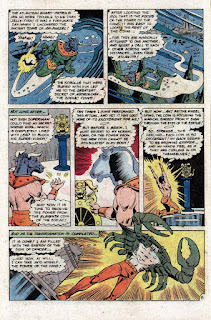 Page 9, and we're back to very familiar Aparo settings, in his comfort zone with a Batman-focused scene, and the kind of cloudy night sky in panel one that Jim often drew: 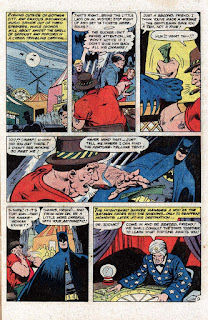 Page 10, and we're still in a page straight out of Jim's Batman ouevre: 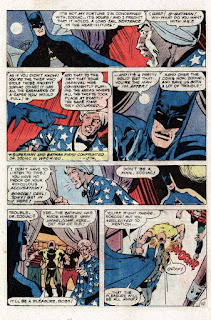 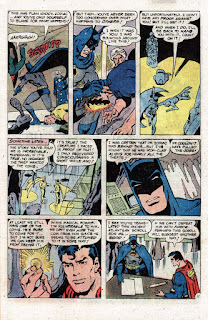 Page 12 is very unlike Aparo. The bended knee on the crab-man suggests Ross Andru to me. 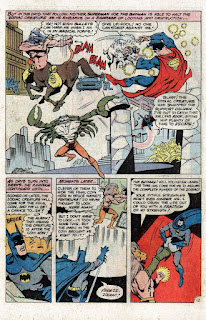 Page 13 has some more Andru-like touches, in particular the turban-wearing villain, but I can see traces of Jim's style in panel 3: 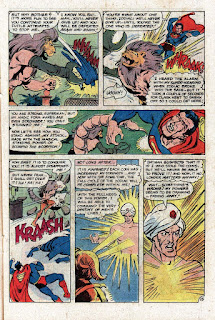 Page 14 wraps things up rather crudely (artistically speaking), but I can see hints of Aparo in panels 2 and 3: 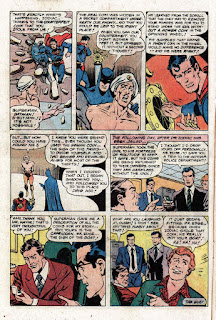 I asked editor Jack C. Harris directly whether Aparo ghost-penciled this story, and he denied any awareness of such a thing. But believe it or not, comic book editors are not always skilled at spotting art, and this has too many hallmarks of Jim Aparo's work for me to believe he didn't have a hand in it. Some pages may have been more fully reworked by Tanghal (or Andru, or someone else), but I'd wager good money that many of these pages were drawn from fairly tight Aparo layouts.
There was at least one other comic book that Jim ghost-pencilled, that I hope to cover here once I get my hands on a copy, but it's a pricey little item that I haven't managed to snag yet.
Posted by M W Gallaher at 1:35 PM No comments:


"I.M. Baytor" offers a perspective on Jim Aparo that's not nearly as negative as one might infer from its title.
Posted by M W Gallaher at 9:43 AM No comments: Only the lower right corner section, with Starman, was used on the published cover of Adventure Comics # 469, cover dated March 1980. Aparo's Plastic Man was replaced with a Joe Staton-drawn illustration: 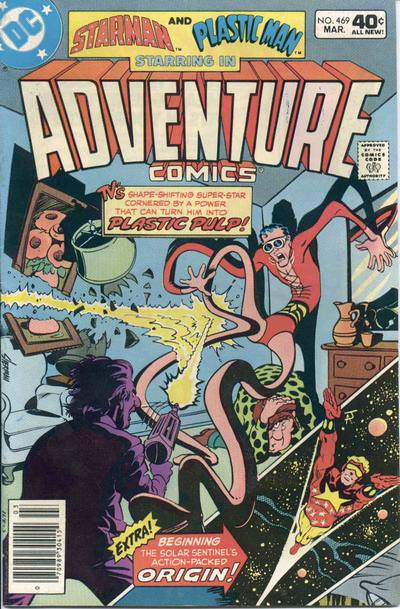 Staton (who pencilled the interior Plastic Man story) has kept the same basic layout, but Plas is defensive and intimidated rather than fighting back, so the editor must have wanted to convey threat instead of a more active engagement.
It's interesting to see Jim work in a more intentionally cartoony style, hearkening back to his earliest comic book work. The villain is clearly in the vein of Ramona Fradon, who had recently handled Plas in his self-titled series, ending in October 1977. Other than Joe Staton, who was penciller on this run in Adventure Comics, Aparo was the only other artist to have drawn Plastic Man in the intervening years, in Brave & Bold #148.
Jim did the full cover of the previous issue, Adventure Comics #468.

Here's a rarity! From DC's Girls' Love #142, an uncredited story pencilled by Jim Aparo, and inked by Bill Draut! If you're having trouble spotting Jim's work underneath Draut's oppressive inks, you're not alone...but look at panels 3 and 4 of page 3 to see the most distinctive evidence of Aparo's style!
Click the pages to expand for a good look at the original art pages! 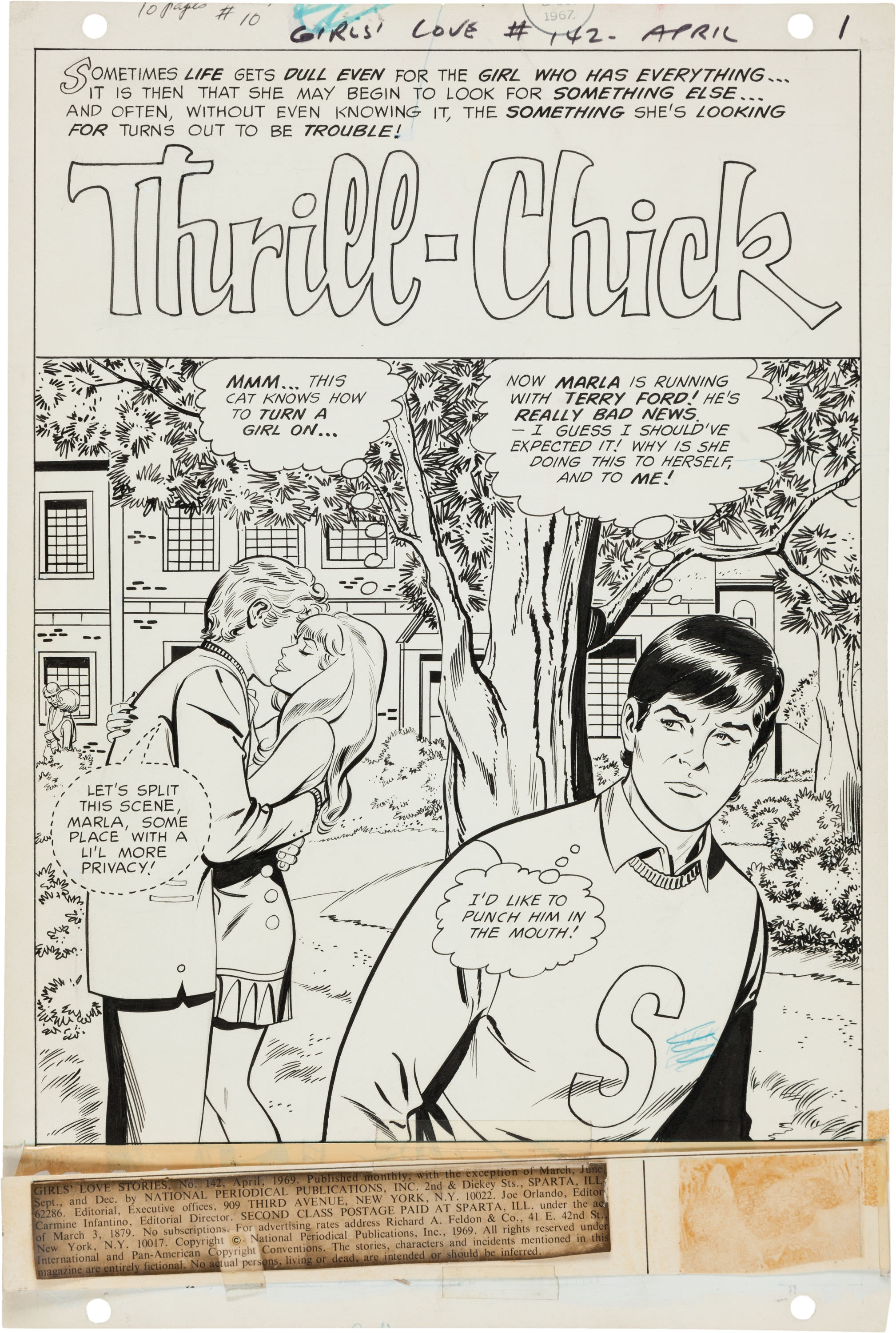